Photo by Ian Taylor on Unsplash

When developing on a Laravel project I've either used Homebrew for my web server and database, or used a Vagrant box provisioned with Ansible. Whilst these work well most of the time there's an alternative that is quickly becoming the de-facto standard: Docker.

Fortunately, getting Laravel to work with Docker is quite straightforward.

Docker is a system that uses 'containers' to provide the services your software needs. These containers are very lightweight instances of the services and can be switched on and off at will.

For example, with a traditional Vagrant box you would have a complete installation of an operating system and then you would add the web server and database to it. If you have different projects with different requirements you would need another vagrant box setting up. These boxes are quite large and not easy to switch between.

Docker simplifies this by separating the Operating System from the services. You would install the Docker program on your computer and then define each of the services you need for each of your projects.

Containers are standalone components defined using a Dockerfile. This file contains commands to inform the docker service which base container (called an 'image') you want to use and any additional setup you need.

These containers are tied together with a docker-compose file. This file contains instructions on what containers/dockerfiles should be used in the project and any configuration they require.

How to use Docker with Laravel

First, make sure you have Docker installed and running on your computer.

Here's the docker-compose.yml file, found at the root of our Laravel project.

Note that this service forwards the container port 80 with the local port 80. If you are already running a web server on your computer you can change these ports, for example, to access the Docker web service on port 8080:

This file sets up the Nginx container to serve files from the /var/www/html/public document root and to pass any requests for PHP files to port 9000.

This is the PHP-FPM service. Instead of defining an image we tell it to use the Dockerfile from our local docker/php-fpm directory. The volumes section mounts our local ./ to /var/www/html, just as we did in the nginx section.

Here's the contents of docker/php-fpm/Dockerfile:

This tells Docker to use the image from php:7.2-fpm (https://hub.docker.com/_/php) and then installs some additional PHP extensions we need for Laravel development. Finally we expose port 9000 on the container to any parent services.

This is the MySQL service container. It uses the mysql:5.7 image from https://hub.docker.com/_/mysql. This image will set up a database using the credentials we set in the environment node.

Before we can start using Docker with Laravel there's one more important step we need to do.

By default, Laravel's .env file contains database credentials with the DH_HOST set as localhost. This won't work with our Docker container as Laravel doesn't know the IP address that the Docker container is using.

However, we can tell Laravel to use the same name as we gave our MySQL service in the docker-compose.yml file and Docker will magically make this work for us. So, change your .env file to the following:

Once the files are configured we can go about starting the services. This is done in two parts. Firstly we need to build the containers which will download the images from Dockerhub and set them up. Secondly we start the services with docker-compose.

Inside your Laravel project root:

This will take a while to download and configure everything. Once done, start the services with:

The -d flag caused Docker to run the services in the background (daemon services).

Note: the example_phpfpm_1 is the name of my php-fpm container. Yours will most probably be different. You can find out your container's name by running docker-compose ps.

To test that our database container is working properly with the rest of our services we can run the default Laravel migrations command:

Finally, let's generate Laravel's built in authorisation and see it in the browser:

If you have any questions or are having problems using the code above, feel free to comment below.

As you can see, using Docker with Laravel is quite easy. However, if you want something even easier to use, Chris Fidao has set up a project called Vessel which simplifies this process. Check it out at https://vessel.shippingdocker.com/. 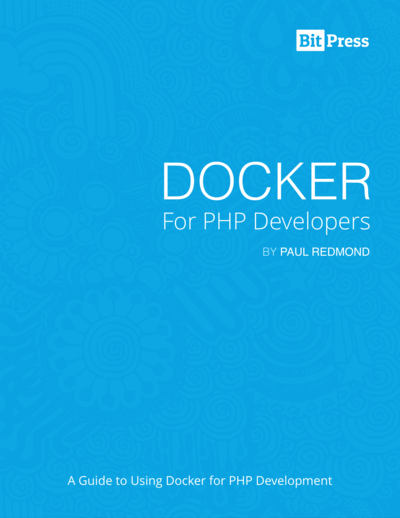 Docker for PHP Developers is a guide that will teach you how to use Docker for PHP development and create clean, repeatable environments that are easy to understand.

Learn how Docker can simplify your PHP development setup and make it easy to share with others. You'll learn how to set up, manage, and deploy Docker apps with confidence.

Check it out at https://leanpub.com/docker-for-php-developers